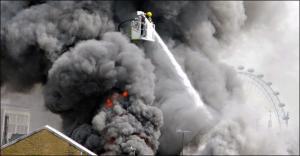 A fire in a car repair workshop on the Isle of Wight has destroyed the unit and spread to adjoining premises, causing major damage.

The blaze broke out at a workshop ramp at Tee Jay Motors garage in Medina Village in Cowes. In addition to a number of cars at the garage, boats and gas cylinders were stored in the units and 30 cylinders had to be removed from the premises before they exploded.

The tools of the trade are often potentially hazardous and care should be taken when working with flammable substances. It is also important to ensure your workshop has adequate levels of motor trade insurance, which covers your equipment, customers’ property and the fabric of your building.

Forty firefighters were called out to the Cowes blaze which spread 100 metres by 100 metres at the height of the fire. The police helicopter was also deployed so its thermal imaging equipment could be used to keep tabs on the temperature of the gas cylinders still on the premises.

Due to thick smoke coming from the fire, local people were advised to keep their doors and windows closed, and a number of local roads around the scene were closed. Two people were treated in hospital for the effects of smoke.

Isle of Wight fire service said that the blaze started when a spark from welding equipment at the garage ignited on contact with a fuel source. The mechanic tried to put it out with a fire extinguisher, but the flames spread to the roof. It spread from the garage roof to the connected neighbouring units.

Other businesses, including a clothing firm and Cowes Carnival also lost stock and equipment. Organisers of the carnival, which is in its 120th year, said they would not give up and have appealed to other local businesses to provide them with premises until the unit is repaired.