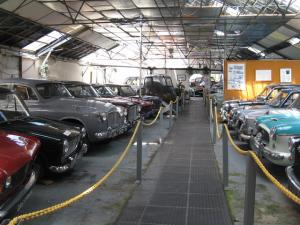 A family-owned classic car dealership that has been trading for more than half a century has taken a novel approach to informing customers about its new showroom project.

Hexagon, based in London, has created a short film featuring classic motors worth more than £20 million, driving around some of the capital’s most recognisable landmarks. The film, called Icons of the Road, ends with the valuable line-up of vintage cars meeting at the dealership's new North London site.

You may not have £20 million of stock on your forecourt to showcase your business, but making a video and sharing it on social media is a valuable marketing tool in the 21st Century. Gaining social media shares and views can help take your message out to hundreds if not thousands of potential new customers. However, if you do decide to go down this route, always make sure you have the right levels of motor trade insurance and road risks insurance for the vehicles you intend to use during filming and to cover the people driving them.

Hexagon’s film features some of the most valuable and iconic classics on the market, including the Ferrari 250 GT California Spider, a Porsche 356 Speedster, a Series 1 Jaguar E-type Roadster and an Aston Martin DB4 GT.

The business was set up in 1963 by Paul Michaels, who now serves as Hexagon’s chairman.

He told AM-Online: “I started Hexagon in a small mews in Belsize Park back in 1963 and we’ve had some incredible years since then including running a privateer F1 team in the Seventies. But 2016 is set to be one of the most remarkable yet.

“We commissioned Icons of the Road because we wanted to celebrate classic cars in a way that no one has done before. The film is all about the cars – not who is driving them. It’s an amusing story about how cars relate to each other, which we hope everyone can enjoy.”