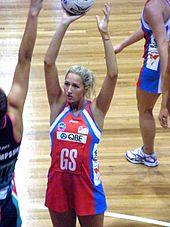 A car dealership group has marked its move into a new area by sponsoring the region’s Netball Superleague team.

Motorpoint, has just opened a car supermarket at Birtley in County Durham, near the famous Angel of the North landmark. The group will now be getting its name out to sports fans with its logo on the kit and boards of the Team Northumbria netball team, whose matches are televised on Sky Sports.

Sponsoring a local sports team is a great way of marketing your business to potential new customers. While you may not be able to get your logo onto the kit of sports people appearing on TV, even working with a local junior football squad can help to spread the word about your business. Promoting your business is key to success but you should also keep up to date with important admin such as making sure your motor trade insurance is up to date and you are properly covered for the stock you have on the forecourt.

Motorpoint’s logo will be seen on Team Northumbria member’s netball dresses during the season which runs from January to April. The dealership group has signed up as a sponsor for both the home and away kit, and its logo will also be on the boards at the Sports Central Arena at Northumbria University, where the team is based.

Sue Vout from the university said: “We are delighted that a company of the calibre of Motorpoint have chosen to partner with Team Northumbria and we look forward to working with them on their activation programme over the coming season.”

Motorpoint Birtley general manager, Matthew Lewis, said: “We are thrilled to have netted an agreement with Team Northumbria for the 2016 season.

“Netball is growing in popularity all the time in the region and we hope that with our support netball can become even bigger in the North East.”