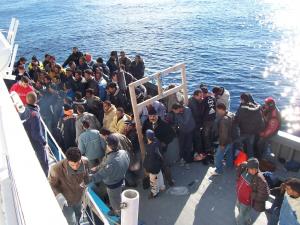 A mechanic has used his skills to help refugees fleeing from the civil war in Syria by fitting out a bus and converting it into a mobile kitchen capable of feeding thousands of people.

Ghafoor Hussain, who runs the M&M Garages business in Middlesbrough, was touched by pictures of refugees walking hundreds of miles to Europe to try to find safety, and decided to help. He found a bus for sale in Cornwall, brought it back to Teesside, stripped it out and refitted it with pantries and cookers. He plans to feed thousands of people a day from the mobile kitchen, which he is taking to Eastern Europe.

Mechanics may not all be turning buses into kitchens, but if you run a workshop, you should have good motor trade insurance and road risks insurance to cover yourself, those working for you, and your customers’ property.

Mr Hussain will be driving the converted bus across to Serbia and Macedonia where many of the refugees are living difficult lives, and rarely get access to hot food. He has invested £6,000 of his own money in the project and is also raising cash for the scheme through an online giving page.

He told Metro: “‘About four weeks ago I took a van full of food to the refugees in Austria, Slovenia and Croatia.

“While I was there I discovered that the people were mostly only getting cold meals. I thought there must be something we can do and that’s when I came up with the idea to buy a bus and convert it into a travelling kitchen.”

The father of four and grandfather of three is aiming to provide hot meals for between 8,000 and 15,000 people every day from the bus. He will be working alongside other volunteers, including doctors, bringing aid to refugee families.