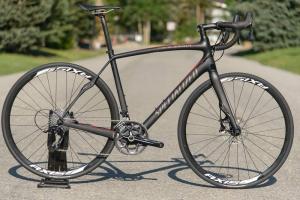 Locals have been left disgusted after thieves broke into a car dealership in Lowdham and made away with a charity bike, collection bucket and cycling gear for a charity cycle ride.

The John Harrison car dealership in Nottinghamshire was planning a 500-mile cycling trip from Paris to Coventry for Children in Need. The business had been leant the bike and equipment for the trip by local cycle company Specialized especially for the journey.

If car dealerships have a combined motor trade insurance policy in place they can protect the assets they have stored on their premises, including vehicles, cash, parts and equipment. This can help cover the financial damage caused by brazen and opportunistic thieves.

Cameron Watson, a sales executive at the dealership, was the man planning to undertake the huge journey from France to the UK in the name of charity. He had been training with the bike - a Specialized Roubaix 2015 full carbon bike worth thousands of pounds - since last year and had it on display at the showroom with photos of his progress so far, the Nottingham Post reported.

Mr Watson, 52, said: "I'm gutted that it's something for charity that someone would have done that. They would have known what it was for, there were Pudsey bears all over the mannequins - I felt a bit sick about it.

"If it was my own bike I wouldn't have felt this bad ... I will still do the ride, by hook or crook I'll end up doing it."

So far the dealership had raised £1,700 for the four-day ride taking place on 20 May.