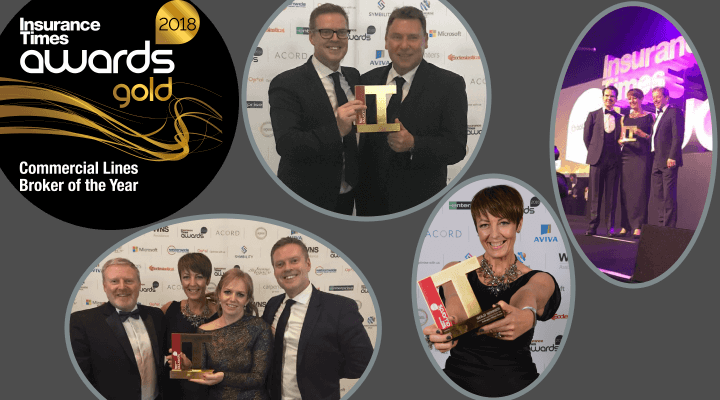 The Bollington Wilson Group is celebrating after picking up a prestigious industry award at the 2018 Insurance Times Awards.

Taking place at the InterContinental O2 on 6th December and hosted by comedian Jimmy Carr, the awards brought together 1,200 people from major UK insurers and brokers in a night celebrating the achievements of the insurance sector.

Bollington Wilson Group beat off competition from five other brokers to pick up the 'Gold' award in the Commercial Lines Broker of the Year category at the flagship industry event, impressing judges following a period of notable growth for the company.

A highly successful year for the company

During a highly successful year in 2018, the company has moved into new state-of-the-art premises in Manchester, merged the SME operations of Bollington Insurance and Quoteline Direct (now part of the Bollington Wilson Group), and has maintained its strong relationships with a range of affinity partners.

As a result, the Bollington Wilson Group has grown to rank among the top 20 insurance brokers by size in the country – with over 400 staff across the company – in an increasingly competitive market.

All of this has been achieved by ensuring our customers remain at the heart of everything we do. Bollington Insurance has maintained its Investor in Customers 'Gold' status and is a Feefo Gold Trusted Partner, reflecting the high levels of service we have consistently sustained throughout 2018.

Proud to be recognised as Commercial Lines Broker of the Year

While Bollington Insurance is no stranger to success at previous Insurance Times Awards, this is the first time that the newly-formed Bollington Wilson Group has been a finalist at the event, scooping the Commercial Lines Broker of the Year award in its first nomination in the category.

Karen Adegoke, Corporate Director, who picked up the award on behalf of Bollington Wilson Group, said: "We are proud to be recognised as the Commercial Lines Broker of the Year following a year of significant change within the company.

"We are now in a great position to further develop our commercial and corporate offering, with exciting initiatives planned to expand the service offering available to all our customers.

"Our staff have put in a tremendous effort during a period of unprecedented growth for the company. They have worked tirelessly to make sure we continue to be the broker of choice for so many businesses across the country. This Insurance Times award shows that their hard work and dedication has paid off, so congratulations to everyone involved in helping the company attain this honour."