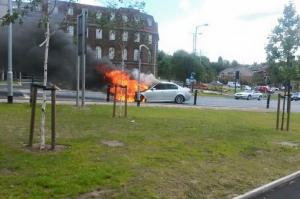 A motorist has narrowly escaped serious injury after the car he was driving burst into flames just three days after he bought it.

Jake Roberts, 30, from Eccles, purchased a BMW 525D M Sport model from Ashton Car Sales for £8,500 on 30 June. The new owner quickly realised some problems with the vehicle's power and decided to take it back to the dealership to have it examined. However, en route the BMW began smoking and within 30 second it had burst into flames - thankfully Mr Roberts had been able to pull over and escape the vehicle in time.

Stories like this illustrate the importance of car dealers having a comprehensive road risks insurance in place. This will offer financial protection for the company's stock while salespeople and mechanics drive vehicles to move them from A to B or ensure they are safe for the customers. This can help prevent cases of motorists getting the keys to their new purchase only to immediately discover potentially dangerous faults.

Mr Roberts told the Manchester Evening News: “As I got to the roundabout the car it went and burst into flames with me in it, over the road to where the car dealership was.

“I called them and said if you look out the window at that big fire that is the car.”

Mr Robert's car insurance reportedly was due to start the day after the fire took place (4 July), but the garage have since claimed on their own motor trade insurance for the vehicle.

Ashton Car Sales are now working to find Mr Roberts a replacement for the BMW, a spokesperson from the dealership said.