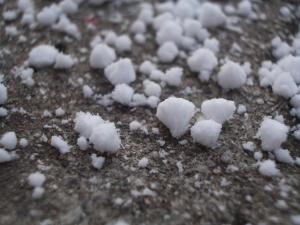 Giant hailstones which came down in a storm across County Durham have written off several cars.

Last Wednesday (1 July) was the hottest day of the year in Britain but the warm weather brought with it heavy storms. In the north east, thunder and lightning were accompanied by hail so severe that it left some cars in the Bishop Auckland area written off by insurance companies.

For car garages and dealerships, the weather can often pose a risk to their business, with floods and hail able to do extreme damage to both their premises and their stock. A motor trade insurance policy will take these environmental risks into consideration and make sure that if cars are written off because of weather related incidents then the business will not be left out of pocket.

The Northern Echo spoke to one man who explained just how serious last week's storms were. Oliver Gray, of Hunwick near Bishop Auckland, said he was going to bed when the thunder and lightning began.

He continued: “It started to rain and that suddenly turned to hailstones.

"I’ve never seen anything like it, only on the TV, and it lasted a good 15 minutes. It was fascinating to watch, I didn’t think for a second that it would have done any damage."

Mr Gray said that when the storm finished he went outside to assess the damage and saw huge dents on both his and his wife's car. He said: "They looked like they’d been sat in a driving range and had loads of golf hit off them."

The family's Vauxhall Vectra was written off, along with several other cars in the local area.