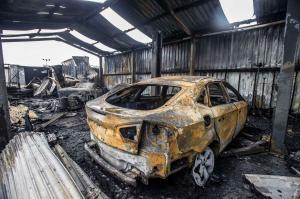 A car dealership in Liverpool has been destroyed by a fire that broke out in the early hours of Thursday morning (25 June).

According to the Liverpool Echo, flames were seen bursting out of the Cars of Wirral dealership at just after 3am yesterday morning. The offices, mechanic's garage and the valeting bay were all decimated by the blaze, which is reported to have caused around £100,000 worth of damage.

Whether accidental or malicious, fires at car dealerships and garages can spread quickly because of the flammable materials - such as oil and petrol - stored on site. This illustrates the importance of a combined motor trade insurance policy that provides comprehensive financial cover for all the businesses assets, including the equipment, spare parts, office furniture, technological devices, cash and cars stored on site, as well as the building itself.

Furthermore, as part of a combined motor trade insurance policy a business can obtain business interruption cover - this will offer additional financial support in case the business faces an extended closure because of something like a fire or flood that requires substantial repair work.

Cars of Wirral owner John Jeffers said: "We’ve lost 14 cars out of 220 on the yard. One is a customer’s, four have just been sold and the rest were fresh stock I bought on Tuesday."

Mr Jeffers explained that the business had only been up and running for eight months, having taken over the derelict site off the Dock Road in Wallasey. Amazingly, despite the fact that much of the building is going to have to be taken down and rebuilt, the dealership owner says they will remain open for business.

An investigation into the fire suggests that there are no suspicious circumstances - it is believed to have been started by an electrical fault.