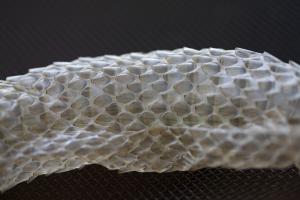 A giant snakeskin has been found in a car garage in Islington, north London, sparking fears that the creatures are invading the area.

The five-feet long scaly remains of the reptile were discovered at J&J Autos in Blundell Street, Holloway. The office manager claims it is the third such skin that the company has found at the site in the last six months, with the nearby Regent’s Canal reportedly housing a colony of the large snakes.

While a scary story for anyone suffering from ophidiophobia, it does serve as a reminder that any motor trade company trading from a business premises must bear in mind that the risks associated with the local area will affect the cost of obtaining a combined motor trade insurance policy. Snake infestations might not be a common problem, but local crime and flood risks will certainly impact on how dear a quote could be.

The Islington Gazette reported that the snakeskin was several inches wide and almost as long as a fully grown adult human. Although it has not been formerly identified yet, it is believed that the shed scales could belong to an Aesculapian snake, the same breed as those spotted on the banks of the canal.

This species can grow up to two metres long and are capable of squeezing cats and dogs to death. The skin was found under a tool box in the car garage but it is believed that the trespassing reptile did not swallow any of the company’s equipment or interfere with the vehicles on site.