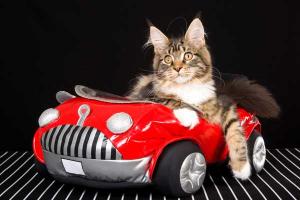 A German motorist who took his car to a local garage because smoke and a screeching sound had been coming out the engine has been shocked to learn the cause of the problem: a live cat.

The man took his vehicle to German Automobile Club in Munich after noticing the problems. The mechanic who inspected the car – Wolfgang Werner, 38 – quickly found a cat curled up in the engine, with the story of this unlucky feline since making the news around the world.

There are all kinds of reasons why cars can breakdown, but a cat taking shelter in the engine is one of the more obscure. Nevertheless, it is important that motor trade businesses protect their staff and their stock against unexpected hazards by obtaining a road risks insurance policy, which will cover employees to drive both the company’s or customers’ vehicles as part of their day-to-day operations.

Having been delivered the car to find the mystery fault, mechanic Werner explained: "I drove the car inside and when I got out I could smell something burning, and heard a weird screeching sound ... I had to dismantle part of the engine to get the cat out, and it was handed over to a vet that had been called to take care of it."

The cat inside had damaged one of its legs and the moving parts had ripped some of its hair out. The Munich Animal Rescue Association said the cat should make a full recovery from its injuries.