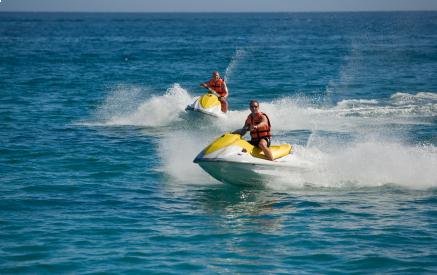 A British man has died in a jet-ski accident while on holiday in France.

Igor Shtutin was riding the jet-ski with his son Michael, three, as a passenger, when the crash happened on the coast near Nice. The boy is being treated in intensive care in hospital for head injuries and a broken hip.

If your business hires out equipment to members of the public, it’s important to have the correct levels of public liability insurance. When the equipment is potentially dangerous, such as jet-skis, you will need adequate cover to compensate customers in the event of an accident, if it is found to have been caused by your equipment.

Mr Shtutin, a financial manager who is believed to be originally from Russia but was living with his family in Northern Ireland, is understood to have hit a wall in a cove after losing control of the jet-ski.

A source told the Daily Telegraph: “There is a speed limit of five knots once you come to within 300 metres from the shore. But the jet-ski was going very, very fast.

Police are investigating whether speed was a factor in the accident. They are also looking at whether there was a fault with the jet-ski and it malfunctioned.

A post-mortem examination is being carried out to find out whether Mr Shtutin had a heart attack while he was in control of the machine, and whether there were any drugs or alcohol in his system.